I wrote this thinking that it might be helpful to some people who are embarking on an Efteling trip with a baby (around the age of 1). In fact, I wish I’d read this before going for the first time with a small person! 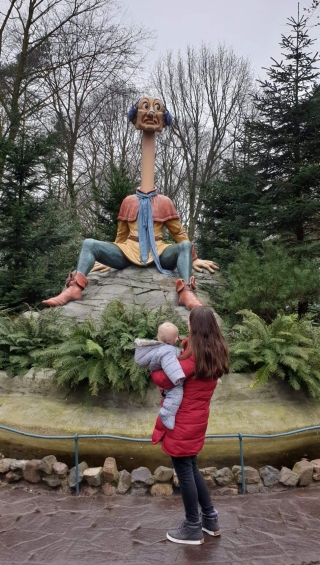 You don’t realise until you have a baby, how much things change once they’re here. This of course also applies to going on holiday with them. Long gone are the days of zipping from coaster to coaster and then having an extra ride on Droomvlucht, eating lunch when you get hungry rather than when routine dictates it, and staying in the park until the very last minute!

After visiting Efteling since the mid-nineties, you’d think I would have it sussed, even with a baby! There are however a few things that are handy to know before you visit with your small person (or people), especially if it’s your first time.

First off, it’s important to note that we visited during Winter Efteling so that does play a part in some of the things we encountered. We were staying at Bosrijk in the Landhuys, and the baby had just turned 1 that week.

I’ll start with talking about Bosrijk;

Landhuys was that my daughter would have a room to herself where we could put her cot. 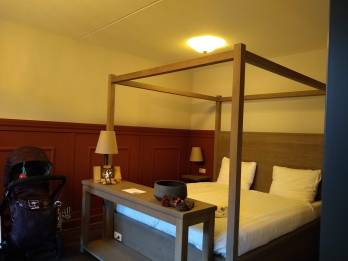 I did notice though, that even though the heating in the main room was turned up and was warm, the kids’ room was rather chilly. Obviously it was January, but I’m not sure why the room wasn’t warming up. It could have just been a fault with that particular room, but it is something worth mentioning. Also in relation to the room, there are no longer cots located in there, so you have to hire one, for €10 a night! 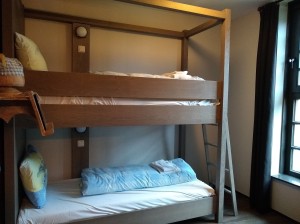 We were fine as we’d brought our own to use on the ferry, however, I do find it quite astonishing that they charge that much, instead of loaning you one for a deposit or even maybe €10 for the duration of your stay. If you’re staying for a few days then it makes more sense to buy your own, because you’ll have paid for one by the time you leave!

Our baby was still having bottles at this stage, so we were a bit disappointed that the only microwaves available are now located just inside the entrance to the Landhuys (we had a microwave steriliser). This wasn’t too much of a problem, as our room was as close as you could get to the main entrance, however it might prove a bit more of an annoyance if you have to go wandering around with sterilisers/bottles/baby food to rooms that are further away. 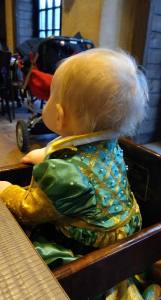 One more annoyance (sorry for the negativity Efteling) is that the new fridges are very small. As in, I had to remove the shelf to get an average carton of juice in there. There’s also no freezer compartment.

Onto a positive now, I always loved the bathroom, but now I have a baby I can see the value of having a bath that has a wall on both sides, just in case they decide to make the great escape. Also, the bathroom has its own thermostat so it gets really toasty in there.

It is such a shame that Efteling chose to take out the dining table from these rooms, mostly because, as you can still order pizza/pasta to the room, you need somewhere to eat it, rather than balancing it on your knee. This was a problem when we did order food to the room, as we didn’t want the baby walking about whilst eating. I have learned since that you can hire a high chair for €5 a day, but that only helps the baby really and not us.

Onto the rest of Bosrijk now, namely the Eethuys. Breakfast is included now which it was not before; some people like this change, some folks not so much. With a baby however, having it included is one less thing to worry about, as on previous visits I would have bought things from the Bosrijk shop, or gone out to the nearest supermarket to buy food. This way, everything is ready for you, all you need to do is turn up. The bonus is the characters that come to visit your table, a nice distraction for a baby who gets bored easily. Suitable breakfast items for the small person include pastries, yoghurt, meats and cheeses. There are doughnuts available for kids too but we skipped those!

One of the first things you might like to do is familiarise yourself with the changing areas, either by picking up a park map or looking on the Efteling app.  There are changing tables in most toilets and there are also feeding rooms available which require a key (info on where to get the key on the Efteling app). Some of the changing areas are shared, as in there are 3 changing tables together, such as in Het Witte Paard. This for us was a good thing as our little girl isn’t a fan of getting changed, so seeing other people with babies in the room was a welcome distraction. 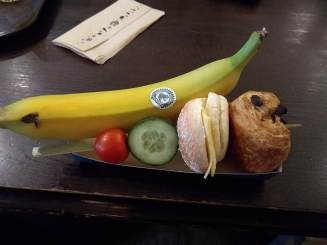 Whilst mentioning Het Witte Paard, this is where we found ‘mini food’. This was a little tray with a small pastry, a piece of fruit, a mini sandwich, a piece of cucumber, and a tomato. I didn’t notice this offering anywhere else but I’ll look next time, because it was a good option for a baby who is past baby food but not onto large meals yet. In general however, the food in Efteling is varied and there are plenty of healthy choices, so there are things that baby could share with you rather than buying them a full meal.

As a side note, it is useful to know that the Dutch seem to microwave baby milk rather than using bottle warmers (or at least Efteling do this). If you aren’t happy with doing this then you might be best to take a travel bottle warmer with you and fill it before you leave on a morning.

In terms of rides, there are plenty that babies are allowed to go on. Our go-to was Carnaval Festival. She’d been prepared by watching a YouTube video several times beforehand, so she already liked the music, and of course the lights and figures are fun to watch. It is a gentle ride and it doesn’t last too long, so it is a great choice for the little ones. 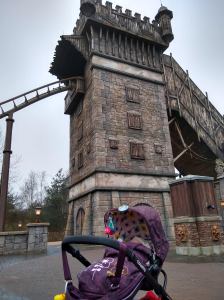 She’ll have to grow a bit to get on here!

This is similar to Symbolica, lots to look at, a gentle ride and not too long. Our daughter did have a little panic on Droomvlucht when you first go up the little hill, but she was fine after that. Maybe for a small person it really does feel very high up, so if you think that your baby might panic and wriggle out, maybe it is best to skip that one. On these rides it is important to say that the staff members told us that the baby had to be able to sit on their own under the bar, and not on our lap.

There are plenty of places outside of the rides to leave your stroller, however most of them are not covered over, so you may need to put on your rain cover before you leave if it’s raining. Fabula does have covered stroller parking, as does Polle’s Keuken, and the Sprookjesboom show, which makes me think that these are provided in places where you are going to spend longer. The (small) stroller parking place for Symbolica is located next to the path to the right of the ride, which is not immediately noticeable (you can tell by all of the strollers parked right at the entrance to the ride!).

I just mentioned the Sprookjesboom show in the fairy tale forest which is of course aimed at the younger guests, as well as Jokie en Jet outside of Carnaval Festival and various fairy tale characters roaming the park; all of these are great and less intense attractions for the babies to experience. Our girl loves the Jokie en Jet show. 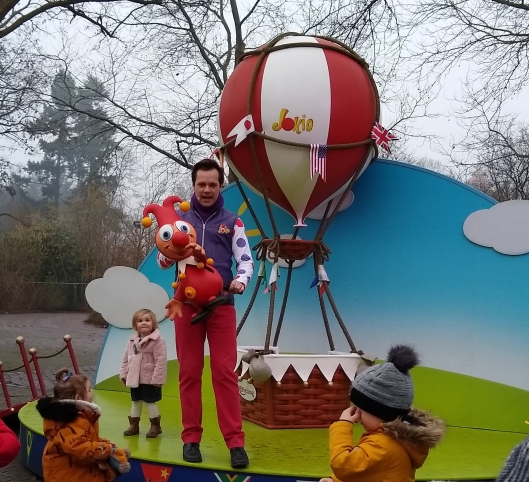 As I mentioned, we visited in January so it was still Winter Efteling. Although there are plenty play areas in the park which are great in the Summer, there just isn’t really anywhere like that to enjoy in the Winter (or just on a wet day). An indoor themed play area would be totally perfect, a bit like what they have attached to the bar in the Efteling Hotel. 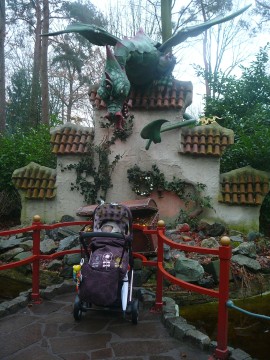 Efteling is a big park, so it is a great place to walk the baby to sleep, and we found that she actually slept quite a lot (thank you cosy snowsuit).

There is a baby switch available if there are two of you and you both want to ride one of the bigger rides, but as we’ve been before, we didn’t use this because we didn’t need to do every single ride.

After trailing the baby around all day, we wanted her to watch Aquanura, however, even though it was only 6:15pm (to be fair her bedtime was about 7pm) it was really hard for the show to hold her attention, and ultimately we left before the end because she was very restless.

In all though, it was a successful visit, and we got a lot of lovely photos (including on-ride photos) to show her when she’s older. You may also find that you’ll spend more money in Jokie’s Wereld than you ever thought you could!

If you’ve never been to Efteling before and you’re doing it with a very small person, expect to not get everything done, but going at a slower pace really does help you to take in the park better than you would normally. 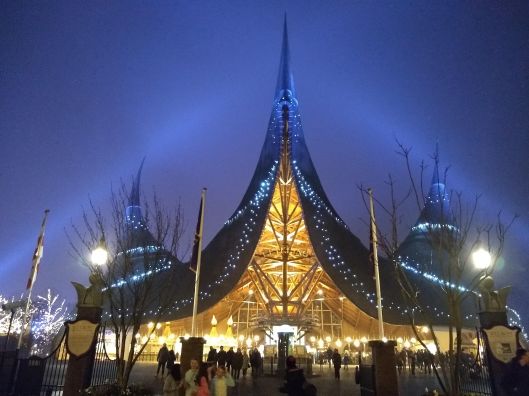