Marerijk is home to very many attractions, and I have to admit, this is the area which houses most of my favourites!:

Droomvlucht is also known by its English name ‘Dream Flight’, and was opened in 1993.  It 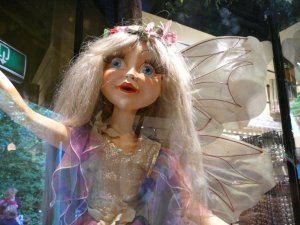 was designed by Ton van de Ven, who designed many other attractions in the park, including numerous scenes in the fairy tale forest.  It is the most popular attraction in Efteling, and gives you the impression of flying through five different realms: the Castle Realm, the Wondrous Forest, the Fairy Garden, Heavenly Strongholds and the Squelch Forest.  Inside there are a staggering 1 million flowers, along with 48 fairies, 10 trolls and a number of animals.  The theming on this ride is so good that even the smell is wonderfully floral and sweet, and you can, at the time of writing, buy house perfume containing the smell of the Dream Flight!

Raveleijn is an open air show which opened in April 2011, it lasts 30 minutes and can seat 1200 guests at each show.  The story was created by Paul van Loon, and is about five children who enter a magic gate and become horsemen, only to discover that a prophecy has foretold that they will defeat Raveleijn’s terrifying leader.  This is when their battle really begins…

Villa Volta is the world’s first ‘Madhouse’, and was also designed by Ton van de Ven.

It is based on the legend of the Buckriders, who were a gang of robbers living in the Netherlands in the 1700s.  The story goes that Villa Volta is the home of Hugo van den Loonsche Duynen, who was the leader of the gang, and after a short introduction to the story in the first room of the attraction, you stand before Hugo himself.  He tells his story in Dutch, but basically there is a curse on his house, which never allows it to be peaceful.  In the third room you finally enter the ride, decorated like a manor house, and it appears to turn you upside-down over and over again to the tune of some haunting music.  This is on the must-do list!

The Efteling Museum is a refreshing break from riding all those wonderful rides!  Inside you will find many interesting Efteling artifacts, including designs for many of the attractions by Anton Pieck and Ton van de Ven, old Efteling merchandise, and a boat load of used animatronic body parts, litter bins, costumes, and countless other items.

Anton Pieckplein Square is one of the oldest parts of the park, opening in 1954.  In this old-fashioned section of the park you will find 3 carousels, alongside an outdoor eating area and The Efteling Museum as mentioned above.  Here you will also find 3 machines which, when a small amount of money is inserted, dispense different things.  The first machine houses a tiny blacksmith who dispenses a small golden ball containing a golden Efteling pin.  The second is a hen, who lays eggs containing a small surprise.  The third is a duck wearing a crown, who lays slightly larger eggs, also containing a small souvenir.  This area of the park is perfect for relaxing between rides!

Stoomtrein circles the park, and has stations in the Fairy Realm and the Adventure Realm.  Recently, the station in the Adventure Realm was built up from a simple platform, to a huge station which houses a food court and plenty seating inside and out.  The oldest train dates back to 1908, with the other two dating back to 1911 and 1992 (big age gap!)  The train from 1914 which has retired can be found outside the station in the Fairy Realm, near the Dream Flight.

originally powered by steam, however it now uses electricity.  Gavioli manufactured  the organ on the ride, and it is one of only 5 remaining in the world.  The ride lasts two minutes, and is surprisingly fast!

Diorama is a large room showcasing 3D miniature scenes based on the drawings of Anton Pieck.   It is 60 metres long, and the buildings which include castles, mountains and villages have been constructed using styrofoam.  It was opened in 1971 for Efteling’s 20th birthday which would take place in 1972. Look very closely to see a tiny model of Anton Pieck painting a picture.