We were sent an article that was written on a blog called ‘a musliminah in NL’ which was about someone’s first visit to Efteling.  It isn’t a long article, and the only attractions mentioned are Sprookjesbos and Carnaval Festival.  The latter, all for the wrong reasons.  The writer seemed to enjoy the ride, until they got to the Japanese section:

‘We reach Japan and suddenly the dolls all have slitty eyes and are fat (sumo wrestlers) and there’s this ominous ‘Asian’ music filled with gong sounds. And of course there’s more slitty-eyed geishas shuffling around.’ 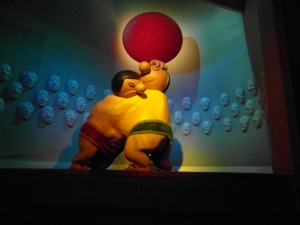 Then they go through Africa, and aren’t keen on how the dolls are black and are hunting animals.

‘It borders on being racist and isn’t it time to update the exhibits?’

You can imagine that this doesn’t sit well with us, but of course, we are biased!  However, on the blog, it does state that the writer is ‘Muslim, Singaporean, politically Malay, historically a mix of Javanese.’  So maybe that is why they have a problem with only specific parts of the ride?  I mean, maybe I would go in there and complain that not all British people are white, and not everyone is a soldier?  How about the French?  In their part of the ride, there is a prostitute on the corner, but the writer seems totally fine with this.  Poor Germany is painted as a bunch of alcoholics, and apparently all Mexicans wear sombreros and ride donkey!  That’s fine though.  As long as the Asians and Africans are changed to be politically correct, then it’s all good!

They do also mention that they aren’t too happy about the figure in the middle of Monsieur Cannibale, but that is expected after their feelings towards Carnaval Festival.

Clearly this irritated us a bit.  Carnaval Festival opened in 1984, and hasn’t been changed massively ever since.  Political correctness was not in huge force then, and even still, do these dolls really offend anyone?  How about Disney’s ‘it’s a small world’?  Does that offend too?

If you’re going to Efteling, you are probably going there to have fun, so don’t take things too seriously; the things you see there are not intended to cause offence.

6 thoughts on “Racism in Carnaval Festival? Only if You’re Looking to be Offended…”