‘Deeply hidden in the caves of PandaDroom, you will find the enchanting underwater world of restaurant Octopus! Here you find fresh gourmet sandwiches, delicious panini and fresh pasta that you create. You will find the Octopus on Pardoes Promenade in Anderrijk.’ 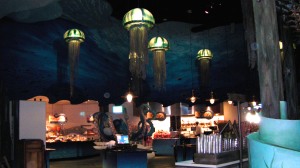 Restaurant Octopus is a wonderful serve-yourself style restaurant that you will encounter on your way into Efteling, on Pardoes Promenade.  It is actually located at the exit of PandaDroom, so you have to walk through the restaurant/shop to leave the attraction.  The theme gives you the impression that you are underwater, with jellyfish hung from the ceiling which double up as lights, the underside of ducks, rocks as walls, and of course, a large octopus.  The whole restaurant is, naturally, painted blue to give the impression of a deep blue sea, and they have quite a wide range of food.  They also have seating outdoors, but all of the cool atmosphere is inside!

The food consists mainly of pasta, panini and sandwiches, and of course, lots of desserts are also available.  Click here for the menu.

The restaurant has undergone a few changes since its opening.  A few years after it opened, the entrance was revamped, with the restaurant receiving a wooden sign with its name on, rather than the mosaic which was originally in place.  Although I liked the original entrance to Octopus, the new one gives a better indication of what it is.

Another addition was the large octopus statue in the centre of the restaurant, which had been lacking, especially considering the name on the door!

Should you visit restaurant Octopus?  Definitely!  For the theming alone it is worth a visit, but in my opinion it is also one of the better places to eat in the park.

Many thanks to Milena Kirk at http://aegtte.weebly.com/ for the menu and for allowing us to use a couple of her photos.

…Or ‘Pancake Day’ to the English-speaking.

Of course, the U.K had Pancake Day back in February, however it seems that the Dutch are celebrating it today.  There was also a pancake relay-race between two schools taking place outside of the restaurant.  Polle’s Keuken has been open for a little while now, but today was the official opening, since it was officially Pancake Day!

Now there is no excuse at all to not go and eat lots of pancakes!

Have you checked out the Efteling UK Facebook page yet?  Check us out for even more Efteling goodness!

There is a really cool Efteling page that has recently gone live, where you can personalize your own story, starring yourself!  It is completely in Dutch, however, I managed to figure my way through it to create my own story, so you could do the same if you don’t speak Dutch!  The best part is when you get to read through your story, as all of the images move and do little things.

On another note, we are now called ‘Efteling UK’ on Twitter, for anyone who is wanting to follow us.

Thanks for reading and keep checking back!

Apparently, the next week will be bringing a lot of sunshine to Efteling, so now is a perfect time to visit!

It is officially Springtime!  Efteling CEO Bart de Boer posted this photo of the tulips in Efteling, with the Pagoda and the Steam Carousel in the background.  Beautiful!

Summer days are getting closer…

I came across a video on YouTube which shows you the best of Efteling in 5 minutes.  It is accompanied by a bizarre remix of Efteling tunes.  Beware, the video contains spoilers!

I have never really mentioned these little gems that are found around the park.  What could be better than litter bins that actually ask you to feed them?  Maybe if big cities had them, people would drop less trash! 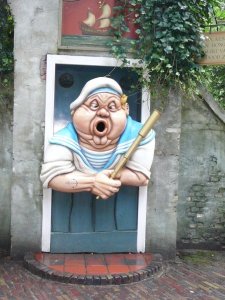 Originally, there was only one Holle Bolle Gijs in the Efteling, but over the years, more have been added to the family.  They are essentially, an army of litter bins.  Litter bins with character and a bit of personality.  They shout for ‘papier hier’ (paper here), encouraging you to feed them your litter.  There is a Grandpa Gijs, a Baby Gijs, a Sailor Gijs, and many more.  The holes in their mouths suck your rubbish clean out of your hand; it is much more fun than your average trash can!

Remember to visit them next time you are visiting Efteling!

Find more information about all of the litter bins here.

Back in September 2011, Efteling and Rabobank set up a competition for a child under the age of 12 to design the 22nd themed room for the Efteling Hotel.  The winner of the competition was Diede Kusterman, aged 10 from Zundert, who designed the ‘Gilded Suite’.  It is themed around a safe, just like the large safe/chest which can be found in the park:

If you have visited the park before, you may be familiar with that chest, as it has a cash machine on one side of it.  Best looking cash machine I’ve ever seen. 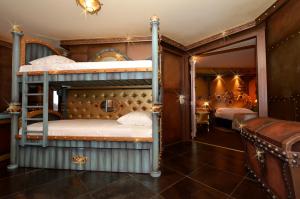 The room, in my opinion, and also in the opinion of a few other Efteling fans, isn’t the best of the themed rooms.  It does look a little bit like a steam punk submarine, however it also has quite a lot of class to it, the kind of class that we all associate with Efteling. 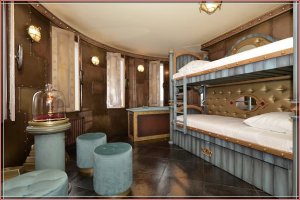 Are you visiting Efteling for a special occasion?  Or maybe you are just on a regular holiday, but fancy making your stay more magical?  The Efteling Hotel’s themed suites are the perfect way to add to your Efteling adventure.  With 22 themed rooms including a Bridal Suite, there are plenty rooms to choose from; some even include whirlpool baths!  Of course, the prices are, as expected, a little higher than the regular rooms, however it is understandable when you look at them and how much theming is included in each room.

Want to have a look for yourself?  Click here.

I will start off by saying that this has previously been mentioned on Eftelist, however it is also something that I noticed the last time I visited Efteling.

Cinderella was installed in the Fairy Tale Forest in 2009, designed by Karel Willemen, who has worked on many Efteling creations, including numerous fairy tales and rides.  The building that Cinderella is housed in is very nice, very large compared to the buildings near to it (Snow White and the Wishing Table).  However, inside, it seems to be rather tiny in comparison to some of the other fairy tales in the forest.  Saying that, none of them are too big, but they all seem to provide enough room for people to move through them at a steady pace, providing everyone with a good view.  In the case of Cinderella, you are presented with a very dark, very small, standing area in front of the scene, with a step in front of you.  Bear in mind that it is dark, so, you probably didn’t see the step when you walked in!  There are also pillars in front of the scene, housing the glass that separates you from Cinderella and the Prince.  Add to the darkness and the pillars a few guests; arm some of them with babies in strollers, and there you have it, a very painful viewing experience.

I mentioned Eftelist at the start of this.  Their issue with the scene was that, unless you are stood at the far right of the scene, you can’t see the most important part of the story: the Prince putting the glass slipper on Cinderella.  If you haven’t seen it before, he does actually do it!  It is kind of clever.  As Eftelist put it, and this is a Google translation, so apologies if it does not say this in Dutch, but it made me laugh anyway…

‘The princely butt blocks the view of the scene almost completely’

So, maybe if we had a side view of the pair, rather than a perfect view of the Prince’s behind, the audience would be a bit happier!

I hope I didn’t bash this fairy tale too much, because it is nice; just not on a busy day when you can’t see it properly.