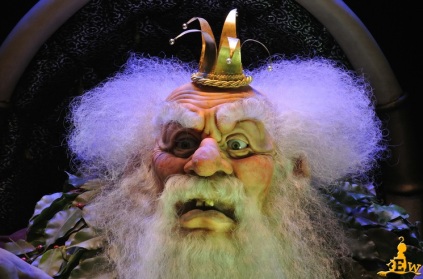 He was under wraps for a little while, but the Troll King has seen the light again!  His makeover has really brought him back to life, and it’s not just about the new mask he’s been given.  His movements seem a lot more fluid, and are those a new set of hands?!  His hair and beard are also very bushy now and less ‘old’ looking.  His eyes seem a lot more realistic too, he’s certainly not dead behind the eyes like he was…it’s like he’s really thinking about things, Kingly things, perhaps.

We’re also pretty sure he’s looking down his nose at everyone when the curtains open and close, but maybe that’s just the angle of the video!

With many thanks to Eftelwesley for the use of photo and video of the new King!

Just for comparison, here’s our video of the Troll King as he was previously.

According to Eftelist, the Troll King has been fenced off, and the belief/hope is that he may be getting his original mask back.  His original face showed a lot more of his subtle movements, and was a lot more fluid and lifelike.  The new mask is ok but not how he was meant to be shown to the world!  Hopefully we’ll soon see a change.

As you know if you have looked at our Gallery page, we have a lot of Efteling photos, some from years and years ago!  So some of them look a little dated.  We decided to give some of them a ‘reboot’ and stick them on our Facebook page.  Here are a couple of the best ones: