Once upon a time in Summer 2012, Efteling UK visited Efteling, and bought a pin ‘book’, a small thing, made out of cardboard, to celebrate 60 years of Efteling.  The first pin, the Witch, came with the book; Mr Long Neck and the Goose Girl were also bought in the Loetiek during the visit.  After arriving home, Efteling UK saw that the ‘Little Message’ pin had become available on the Efteling Web Shop, so it was purchased and put in the book with the rest of the pin set.  Some time went by, and the Snow White pin appeared on the Web Shop, along with the Holle Bolle Gijs pin.  Snow White was put into the basket, but Holle Bolle Gijs was sold out!  So then Efteling UK was faced with this:

We had never planned on collecting them all in the first place, but being only 1 pin short was a little frustrating!  We did contact the Efteling Web Shop and they said they wouldn’t be getting any more of the pins online.  Even more annoyingly, this pin had sold out in about 3 days after being released!  We still aren’t too sure why this one was so popular…So, what to do?  To Google!  And through the wonders of the internet, we came across a little site called Pinparade.nl.  We located the stray pin on their site and sent them an e-mail, asking for help getting hold of the pin.

We were replied to by a very nice person called Pim, who helped us out a great deal in locating said pin.  After many an e-mail back and forth, the pin was sent, and today, it arrived!  Forget Christmas presents, this is what we’ve been waiting for! 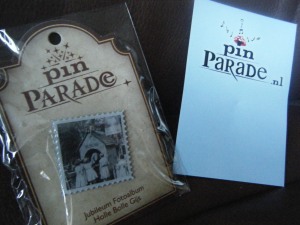 Here it is, the illusive Holle Bolle Gijs pin!  We are easily pleased here at Efteling UK 🙂

We think they look great, and would like to say thank you to Pim and Ronald at Pin Parade!